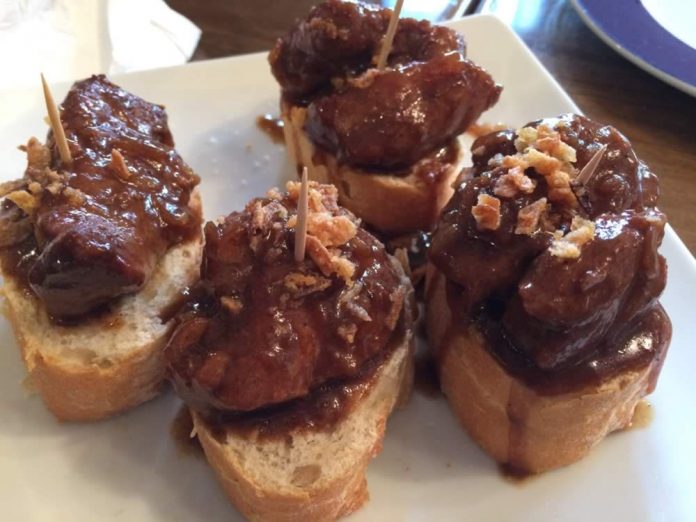 Tapas are a wide variety of appetizers, or snacks, in Spanish cuisine. They may be cold (such as mixed olives, manchego cheese or russian salad) or warm (such as chorizo sausage, meatballs or small portions of pork or chicken).

The word “tapas” is derived from the Spanish verb tapar, “to cover”.

According to legend, the tapas tradition began when King Alfonso X of Castile recovered from an illness by drinking wine with small dishes between meals. After regaining his health, the king ordered that taverns would not be allowed to serve wine to customers unless it was accompanied by a small snack or “tapa”.

The original tapas were the slices of bread or meat which drinkers used to cover their glasses between sips. This was a practical measure to prevent flies or insects and also any dust and dirt from getting into the drink. The meat used was normally ham or chorizo, which are both very salty and make the drinkers more thirsty. Developing from this, bartenders and restaurant owners began creating a variety of snacks to serve with their drinks.

Tapas have evolved through Spanish history by incorporating ingredients and influences from many different cultures and countries. Most of the Iberian Peninsula was invaded by the Romans, who introduced olives and irrigation methods. The invasion of the North African Moors in the 8th century brought almonds, citrus fruits and fragrant spices and the influence of their 700-year presence remains today. The discovery of the New World brought the introduction of tomatoes, sweet and chili peppers, maize (corn) and potatoes.