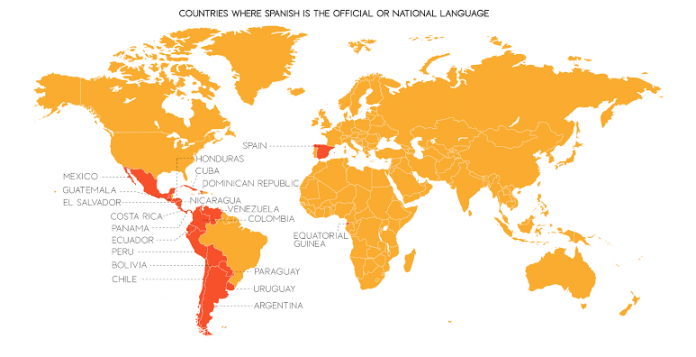 One of the biggest differences is where the “C” sound is pronounced as “TH” (as in most of Spain) or as a “S” sound (as in South America and also the Andalucia region in the south-west of Spain and in the Canary Islands). The use of the “S” sound for the letter C is known as “el seseo”.

Whether you ask for a beer as “Thervetha” or “Servesa”, you will probably be understood but your pronunciation will show where you come from (unless you pronouce it really badly and it is obvious you are English ha ha). If you really want to impress the locals, you can learn the regional differences in Spanish accent and adapt yours depending where you are!

Here are my notes on the Spanish accent differences in various countries and there are some good videos below.

Latin America all use the s sound as well. Plus other differences

Mexico             Sound like carrying something heavy or out of breath. Air flowing out as they
speak

Argentina          Like an Italian over-impressed with own Spanish. Pronounce ll sound as sh

Venezuela         Replace letter s with a little sigh. Sighing out air from lungs. Musical sound and
rhythm. Have adopted lots of English words.

Dominica          Speak very fast and run it all together

Colombia          Like Sean Connery speaking Spanish, lots of sh sounds. Sounds like a very sad story
all the time. Use tu very little, usted for family and friends and not
considered formal, and vos for formal. Speak slowly. Use diminutives a
lot (adding -ico or -ito at end of words, not gato, gatico).

This is a more light-hearted view of various Spanish accents (very popular though, with over 5.3m views on Youtube!)

We hope you enjoy practising the different Spanish accents and trying to identify where people are from based on their accent – they will be impressed if you get it right and can explain why!

SpanishDict is a great Spanish Dictionary App that gives good examples of words in context and also conjugations of verbs, daily words to learn, your own custom word lists and a lot more. Their website has a good page of videos about Spanish pronunciation as well.

We also came across a great page on the SpainshDict site on Onomatopoeia in Spanish – words that make the same sound as the thing they are describing, like the noise a sheep makes. We are guessing that Spanish sheep actually make the same sound as English sheep but is interesting how different cultures interpret that noise – “Baa” in English becomes “Beee” in Spanish!